The Politics of Family Secrecy

The German Occupation of Denmark 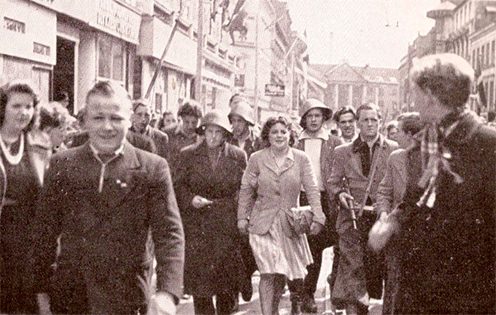 The German Occupation of Denmark intersected with family life and the formation of the Danish welfare state in multiple ways. There is an extensive body of research on Denmark and the role of Danish actors, either as collaborators or as members of the resistance, during this time.  However, a focus on practices of family secrecy develops different perspectives on how the Occupation and its aftermath shaped families’ everyday life as well as interactions with the state. After the war, popular contempt and legal persecution did not just punish high-level collaborators. They also impacted people who had any kind of personal or institutional affiliation with German occupiers. This often forced families to respond to the public exposure of one of their members. In my project, I focus on multiple case studies to analyze how different experiences could become a family secret related to the German Occupation: for example, secrecy around NSU (Nationalsocialistiske Ungdom) membership for young Danes or the difficult situation of Danish mothers who had children with German soldiers. These Danish German children born of war faced then a particular intersection of family and state secret throughout post-war Denmark as well, because both mothers and state archives tended to conceal the identities of German fathers, often well into the 1990s. Finally, I will turn to a meta-perspective about how children’s and grandchildren’s genealogical research into hidden family occupation histories relates to post-war national narratives. Which experiences became a family secret during the Occupation and did these stigmata change over time? When and how was this knowledge transferred to next generations? And how does family secrecy about the Occupation differ, support or challenge practices of post-war state secrecy? To answer these questions, I draw on historical newspapers, national archives, published testimonies by children born of war as well as qualitative interviews.

PhD. Koegeler-Abdi is a postdoctoral researcher at the University of Copenhagen. She holds degrees in American Studies, Comparative Literary and Cultural Studies as well as Women’s and Gender Studies. Her dissertation Adaptive Agency and Arab American Womanhood, 1893-1967 explores the cultural histories of Arab American women and she has published on US multi-ethnic literatures, performance studies, transnational feminism and the politics of adaptation. Koegeler-Abdi also co-edited the book Interculturality: Practice Meets Research and a special issue conversation piece on Place in American Culture. She was a Fulbright Fellow at SUNY Stony Brook as well as a visiting research fellow at Brown University and received various grants and awards for her work.